This is another refreshing feeling. I have no words to explain it but I find myself gravitating towards the Muslim world for some reason. Not because I am doing any sort of spiritual transformation into Islam, but instead there is an attraction to it that I can’t fully explain. My experience with Islam and traveling to countries dominated by the religion is exactly what got me this volunteer job. During the interview I was told that is what set me apart from the other candidates as well as already having been to Bukit Lawang. What I like about the version of Islam in Indonesia is that it isn’t incredibly conservative so it’s a nice mixture of western, eastern and Islamic tradition. It’s interesting hearing the call to prayer against a jungle back drop as opposed to the more traditional Arabian landscapes of desert and dry plains. 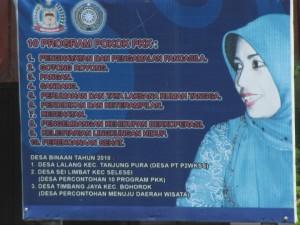 Islam but not too conservative

It’s certainly an interesting time to be here given the recent developments in the “war on terror.” I don’t shy away from political conservations when I travel even though it’s often suggested to avoid them. I find if I keep an open mind and listen to what others say, I can gain a lot of knowledge and perspective I might not otherwise have had. Indonesia gets a bad wrap as being a country where a majority of the population disagree with western values and are hostile towards Americans. I can say with confidence that I haven’t met anyone that came even close to anti-American sentiment. Obviously, I could eventually come across the occasional hatred but that can happen anywhere. There are small factions within Indonesia that want to overthrow the moderate government that is currently in place. Sharia law is already practice in the province north of here, Aceh, which gained national attention during the 2006 Indian Ocean Tsunami where 60,000 Indonesians lost their lives. Indonesia is one of those places that being American seems to be an asset and adds to my experience. As opposed to the British or Dutch who they see far more of, Americans offer them a conversation that they don’t normally get to have. It doesn’t hurt having Obama as president since he lived in Indonesia for 4 years and many Indonesians think very highly of him. “Where are you from?” … “America.” “Ooooh-BAHM-ah!!!”

After my contract is over I’m probably going to spend a few weeks traveling through the parts of Sumatra I haven’t seen yet. Including Banda Aceh at the very northern tip where I can see for myself a beautiful city with friendly people that the state department says is a no-go area for Americans.