I’m not an expert on Thai culture but as I recently finished up my fourth month in the country I feel there are 5 tips I can share that might set you apart from others when visiting. I gathered these by talking to Thais and asking them to speak to me candidly about certain habits that foreigners have when in their country.

1. Don’t wai unless you mean it
The wai is a traditional way of greeting and showing respect in Thailand where the hands are clasped together. As a general rule when going to Thailand foreigners should avoid wai’ing at all. You tend to want to respect cultures by emulating locals but there is an intricate social hierarchy here and more often than not you’re probably wai’ing inappropriately. I’m still guilty of doing this when it isn’t necessary, often drawing polite laughter from Thais. Even the level at which you place the tips of your fingers is significant. You never wai someone younger and there is no need to wai when you walk in and out of a restaurant like so many of us “farang” do. It takes time to understand the wai unless you have been in Thailand for awhile it’s probably a better idea not to.

2. Turn that frown upside down
Welcome to the land of smiles. If you’re in Thailand, you must smile. This isn’t optional. Even on those days when you just want to be left alone and have no desire to show any sort of cheer you have to force yourself to give a pleasant smile as you pass by a local who is waving to you or giving you a polite greeting. A lack of a smile and a straight face can come off as hostile in certain situations so it’s better to keep it on your face as often as possible. 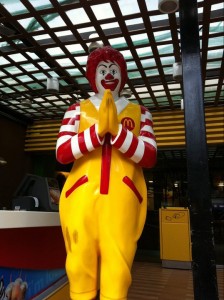 3. Don’t speak pigeon English.
This is one of my personal pet peeves when traveling anywhere in the world. As native English speakers we should be speaking to locals in proper English. Dumbing down sentences in order to make your point doesn’t help. It only reinforces poor spoken English. If you mean to say, “I don’t have a phone,” then don’t say, “Me no have phone.” That’s pigeon English. Just speak normally but slightly slower if they don’t understand you. If you use proper pronunciation and full sentences it is no more difficult to understand than “Me work English teacher, what you do work?” For some Thais, even if not many, it can come off as condescending and insulting.

4. Put a shirt on even if they say it doesn’t bother them.
Thailand is a conservative Buddhist country. No matter how many Thais tell you to your face that going topless in a restaurant or around town is OK, it’s just not. They’ll save you the embarrassment by saying it’s not a problem but in reality it makes many Thais uncomfortable. This goes for the south as well where there is a large Muslim presence. I’ll never forget being in Phuket and seeing a bus full of Muslim students staring off at a topless European woman walking up and down the beach. This is disrespectful to the people who live in Thailand. Sure, they tolerate it, but is that really all we’re looking to do? Having Thais simply tolerate us? So in short ,if you’re a man, put a shirt on if you’re not walking on the beach and for a woman, never go topless.

5. Stop saying thank you all the time.
This one was so difficult for me to stop doing. I’m so used to being at restaurants back home in America and saying thank you for every little thing that the waiter does. Here in Thailand there is no need to do this. When the waiter or waitress brings out a menu, drops off the drinks, or brings you a fresh spoon, it isn’t necessary to say anything. This is difficult habit for westerners to break I’m sure but in Thailand, politeness is always implied and there is no need to actually say the words. There are phrases for please and thank you but they’re just not used the same way.