In addition to weather, mother nature also brings an onslaught of annoyances from the animal kingdom here in Sumatra. I’ve become more comfortable with spiders but have grown to fear bees and wasps much more. I’ve come to terms with spiders being a part of life here and I know that they do keep the other bugs at bay. I prefer the spiders that make webs so I know where they are at all times but these little jumping spiders around the clinic seem pretty harmless. If I freak out every time I see one I wouldn’t get much done so I’ve decided to co-exist with them. I tend to talk to spiders and wasps and try to make agreements with them where we don’t bother each other. A wasp in my bungalow last weekend broke our agreement and kept flying a little too close to me for no reason. I got rid of him and his friend who made home inside my room. Hopefully it taught the other bugs a lesson. I sleep with a pretty nasty looking spider that has a web a few feet from where I lay my head at night but since he is in a web and should have no reason to come down, we co-exist nicely. If he breaks that trust I think he knows what will happen. 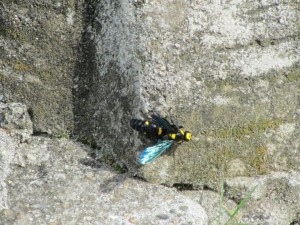 Pretty, but what the hell is it?

The monkeys around town are pretty cool. They are short tailed maquaques that march around the guesthouses in packs in search of the lazy tourist who leaves food open in their room or out on the porch. I know I made the mistake of leaving a half eaten bag of crackers in my room and when I returned the bag was gone. Luckily, monkeys aren’t interested in money or passports. While sitting at a restaurant by the river this week, a large pack of monkeys came to stalk the area waiting for a slip up. One of the bigger ones was brave enough to come into the common area, snatch a bag of biscuits and take off with it. I tried to shoo him off before he grabbed it but I ended up only managing to scare him enough to spill my coffee on to my iPod and cell phone. Aside from a distinct mocha odor my phone is fine.
Bats are pretty common here as well. The Indonesian word for bat is kalilawar. I thought that was interesting enough to share. There is one bat that flies around the front of the clinic every evening at pretty low altitude right over your head if you stand in the right place. Apparently he’s swooping in to eat some bugs so he’s OK with me.

Ants are quickly becoming a non-issue for me. I often find ants in my bed even though I never have food in my room. I ignore them or flick them off the side. They are real tiny and not the ones that bite so I try not to think about them.

An old friend from home, the gecko, is also another welcome guest in my room at night. Aside from the occasional screech they mostly just run around the walls and ceiling and chomp on unsuspecting mosquitoes.

I’d love to report that I’ve seen a Sumatran tiger but I’ve talked to people who have lived here their whole lives and have never spotted one. Tourists generally have to take a 1-2 week jungle trek to get even a chance to catch a glimpse of one. They are obviously really quick and evasive.

One thought on “Spiders, Wasps and Other Stingy Creatures”