I’ve committed blogger sin and in the heart of my first teaching gig I went off the grid. I want to apologize for the lack of updates. I spent the second month of my volunteer contract in Sumatra just experiencing it. Sometimes it’s best to be that way. I didn’t put too much thought into writing. The contract is finished and due to strict immigration laws I was forced to make my way out of Indonesia. If I had it my way I would still be in Sumatra spending my money there but instead I am in Thailand now and will vacation for a couple of weeks in here before heading back to Indonesia.

Everything finished up smoothly in Bukit Lawang. I eventually got the hang of lesson planning and execution. I started to get really comfortable with myself and with the students. It started to become fun. Life in the village was good and the last week I spent by the river at a guest house with some great friends that I’m sure I’ll keep in touch with. 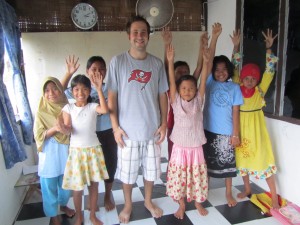 Hands in the air for Mr. Joe!!

Next Step
I’m faced with a tough decision right now. For the last three months everything has been set up for me. I was doing my TEFL certification in April and immediately jumped into the volunteering in Sumatra. I haven’t had to make any decisions on what I’m doing as it’s been laid out in front of me. Now, what though?

For years my final teaching destination was always going to be Thailand. Specifically, Chiang Mai. Indonesia was also in the mix but I never really thought it would appeal to me as much as Thailand. The tables have turned dramatically now after having experienced the warmth of Northern Sumatra. I find myself missing the language and the people the most. I came back to Thailand with multiple motives. One was obviously to just have some fun for a couple of weeks and hang out by the water. The other was to see how I would feel after 2 months in Indonesia and whether or not Thailand would still appeal to me. I’ve confirmed Thailand as a holiday destination and not a place for me to live. The language is too difficult and I don’t want to live somewhere that I can’t pick up the language. One of my goals in living abroad was to acquire fluency in another language and Bahasa Indonesia is easy enough for that to happen. In 2 months I’ve become quite comfortable with holding pretty solid conversations with people. The population is far more eager to teach and there is less English overall so the necessity is there.

Now that I’ve narrowed it down to Indonesia with out any doubt, there comes the question of where? I’ve had a connection in Jakarta for some years now that has offered me a position if I’m willing to come take it. However, I’ve kind of fallen in love with Sumatra. I love a lot of things about it and I can see myself living in Medan, taking a job teaching English for a 12 month contract and really becoming fluent in Bahasa Indonesia by the end of it. I have friends that I have made already and places within the island I haven’t yet visited so plenty of new opportunities to explore.

Medan is a short flight away from Kuala Lumpur, Singapore and Bangkok which could all make for long weekend getaways. I plan to purchase a motorcycle if I live in Medan so that I can travel myself outside of the city back to Bukit Lawang and Lake Toba on the weekends. Public buses take way too long and the tourist buses are really expensive. I sent out my resume and cover letter to a school in Medan that posted a job 2 days ago. I feel good about my chances if they take a look at my email, however I can’t tell how many people are trying to get jobs in Medan. I did include that I am currently in Thailand and my availability to start is immediately. This means that the school wouldn’t have to prepare a flight from the west and could save money by hiring me. That being said, there could be candidates showing up at the school in Medan in person who would be a better choice. I really have no idea what to expect but I’m hoping one way or another I hear something back shortly so that I can decide on what I’m going to do.

Flights from Bangkok to Jakarta at the end of next week are around $200 where as a flight to Medan is only about $80 and another $100 to Jakarta. So my thinking is that I will go back to Medan next week, purchase a tie and some slacks and go door-to-door with my resume and see what happens. If I don’t have any luck finding something then I will know I did my best and can head to Jakarta and take the position at EF that is available.

I kind of feel like I belong in Sumatra. Jakarta would be really fun and I’m certain there is a lot more to do as an ex-pat, but Sumatra is just where I need to be.