There are few foods in this world that make my tongue dance the minute it touches them. Back home in the United States it’s definitely a nice thin slice of New York style pizza and maybe BBQ pork doused in delicious sweet sauce. As far as international cuisine, there is green curry chicken in Thailand and flour tortillas dipped in hot white Mexican cheese. (Although I suspect that is more of a Tex-Mex thing) Alfredo sauce just about rounds out all of my favorite foods in this world. 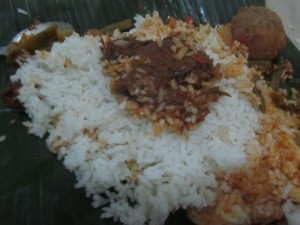 Indonesia doesn’t have the most internationally renowned food in the world but there is one item that is the monster of all dishes here, and it’s rendang.

Like most of the good food in Indonesia, rendeng comes from the province of West Sumatra and the Minangkabau people in and around Padang and Bukit Tinggi. I think rendang is an acquired taste as the first few times I ate it I wasn’t sure of the hype around it. It takes a few times to really understand the flavor.

Rendang is slow cooked much like a pot roast and seasoned with all kinds of different spices such as lemon grass, chillies, or ginger and made with coconut milk. It’s most commonly made with beef but rendang is also made with chicken and duck.

Also like other Indonesian dishes it doesn’t look like much to the eye. Prepared, as usual, on banana leaves it’s widely available throughout Medan. The best I’ve had so far is at a small warung (small restaurant) near my house. I plan to try several more locations. It’s often quite spicy but not so much that it takes away from the flavor.

If you’re in Indonesia try to break away from the common menu items in the tourist restaurants such as mie and nasi goreng and hit up a food stall that has rendang. I noticed rendang isn’t often on the guest house menus around North Sumatra possibly due to it’s degree of difficulty in cooking.

It’s easily my favorite food now over ayam bakar. Don’t come to Indonesia with out trying it.

One thought on “Food Friday: Rendang”