I’ve only had two heroes during my adult life. While Captain Jean-Luc Picard will never die and can always live on through replays of Star Trek: The Next Generation, my other hero, Christopher Hitchens, has died of esophageal cancer at the age of 62. However, he too can live on forever through his words. He so eloquently illustrated this when asked why he would not want to believe in a God and heaven which would allow him to one day meet William Shakespeare. His response was, “The only reason I might even want to meet Shakespeare is because I can meet him anytime because he is immortal in the works left behind. If you’ve read those, meeting the author [in heaven] might certainly be a disappointment.” 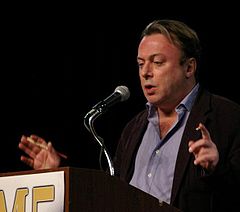 "Human decency is not derived from religion. It precedes it."

That’s just one of the many examples of the inspiring and thought provoking statements from Hitchens. Luckily I live in a time where access to debates, speeches and documentaries is possible on Youtube at any hour of the day. (Hopefully it stays this way… who knows given the new internet censorship legislation that has recently passed under the Obama administration) Around the middle of last year I was turned on to Hitchens through debates on religion and anti-theism scattered throughout the internet. I never looked back. I was drawn into his speaking style. He is direct and often harsh but he never speaks just for the sake of a reaction. His provocative attacks against beloved public figures such as Dalai Lama and Pope Benedict XVI are always grounded in truth. I don’t agree with everything he has said and that’s just the thing that made him such a good writer and speaker. He urged people to always question, always doubt and always challenge what is accepted as “right,” even if it meant disagreeing with him. This is all done without the need for baseless conspiracy theories or ad-hominem attacks (although he occasionally straddled this line.)

I’ve strayed a long way from the Church since my adolescence and there had always been a discomfort within me, but Christopher Hitchens, through his books and debates, has helped open my eyes. I might not go as far as he would in saying that there is nothing good that can come of religion but he has argued over and over that any good acts that might come in the name of religion are not born of the religion itself but rather the innate goodness in humans to work together to survive as a species. When faced with the argument from theists of where our morality comes from, if not from God, he asks how would Moses have made it to the top of Mount Sinai to receive the ten commandments without roughly 100,000 years of modern humans working together and having a strong moral code built within. Did we really learn the right way to live that late in our development as modern humans?

Like him or dislike him, Christopher Hitchens made you think. I never really understood why he would agree to go on shows debating hacks on cable news networks such as CNN and Fox News. I guess everyone has to sell a book sometimes. His lowest points for me were when he was engaged in debate with people who were clearly intellectually inferior. It’s similar to Richard Dawkins having a debate about religion with Bill O’Reilly. It just ends up making the more intellectual of the two look like a bully and in the end no side has really said anything meaningful.

What was also very inspiring about Christopher Hitchens was his ability to blur political party lines. People on both sides, republicans and democrats, would always try to claim him for themselves but being along any party line is impossible if you truly think for yourself. Being a free thinker doesn’t mean identifying with the republican party, going down the check-list and forming your system of beliefs based off of what is expected of you as a republican. He has liberal beliefs in some aspects and conservative beliefs in others.

For now though, I’ll pour a glass of Johnny Walker Black Label scotch on the rocks while I finish up this entry and then watch a few Hitchens videos. According to him Black Label is the best valued scotch the world has to offer and he often would tell people this who asked. This day was coming. The man hit the booze and cigarettes hard his whole life. I’m glad I found out about him when I did because he’s opened up my eyes. He has always been a champion of realism, honest debate and intellectualism. For that I thank him and the world has lost a great mind today.

Anderson Cooper: “You said you burned the candle at both ends”

Christopher Hitchens: “And it gave a lovely light…”