Well, I’ve arrived in Bahir Dar. Think Daytona Beach, but set in Africa. It lies on the southern end of Ethiopia’s largest lake. Lake Tana. The journey here was long but well worth it. I finally left the dusty, sprawling and noisy confines of the capital and have arrived at my lake side hotel. It is a rather large room with twin beds sitting next to the hotel’s terrace restaurant. It seems like just when I’m getting down about everything and feeling like I’m going to suffocate in my own travels, along comes an experience like today. Four days in two of Africa’s largest cities (Nairobi, Addis Ababa) was enough for me and now I can relax.

The journey started very early this morning at 4:30am. I was told that a driver would be in front of the hotel to pick me up. A 4WD arrived at about 5am and we took off. I thought I was going to be the only one on this trip but that is not the African way. The vehicle was soon packed with 7 Ethiopian’s all on a journey north to the city of Gondar. I was to be let off in the town of Bahir Dar before they continued on. At the time I didn’t know it but the journey took about nine hours. We left Addis Ababa and after only about a three minute drive we were suddenly in the mountains. The sun crept up after an hour or so and I finally got to see the countryside I had been waiting for. Rolling hills with huts scattered along the landscape. Although I thought it would be greener than it was, apparently it is dry season right now. 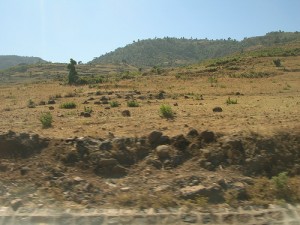 Along the side of the road you could see small villages, farmers and herders getting to work early. We stopped to stretch our legs in a small town near the Blue Nile Gorge. Here comes the “faranji frenzy” (or “foreigner frenzy”). I was warned about it but you really don’t expect it to be as uncomfortable as it is till you experience it. We stepped out of the car and immediately a crowd of Ethiopian children came up to it and looked inside, around, and underneath the car then all eyes turned to me. It seems as though every person on this specific block was staring at me. This is not the polite glance back and forth type either. One teenager stood no more than five feet away stared endlessly at me. I looked off in the distance and the same for the elders. I was strange. I am sure I was not the first white person to pass through this town because it is on the way to some places frequented by tourists but I guess the novelty never wears off. It is uncomfortable at first but after a few stops I decide to make sure I kept a smile on my face and waved. The small kids LOVE to wave.

The scenery on the way was fantastic. Although, while it was similar to, it does not have the colors that Morocco had. Our driver was driving fast and a few times I thought we were going to collide head on with buses traveling the other direction. This another one of those things that you learn to get used to after enough time traveling in the developing world.

After the Blue Nile Gorge the trip can be taken two different ways. A smooth paved road that takes longer or a bumpy back road that is much quicker but still several hours. Our driver took the bumpy, and I imagine, more scenic route. It seemed like we were passing through backyards and I swear some of the roads were paved in dung. We did not go more than a minute or two without seeing people. Civilization is everywhere in Ethiopia, however limited and poor it may seem. And that is just the thing, they don’t LOOK poor. It is just rural farming and very basic housing. I imagine it is not much worse than having a nice little shack to camp in. The problem is that is how it looks superficially and when the rains don’t fall and crops don’t grow, the people suffer.

I came to the conclusion that I enjoy rural Ethiopia much more. We stopped to use the bathroom (pee off a cliff on the side of a road) right near these huts. It was no development, no neighborhood, just a family who lived in that area. The children that came up to us didn’t stare but they smiled and played and laughed and tried to talk to me. It seemed I got more attention than the others in the vehicle but even they were stared at. Imagine living a simple life herding sheep and every couple of hours a huge, loud and dusty white monster comes barrel-assing down the hills then suddenly seven people jump out. I would be curious too. 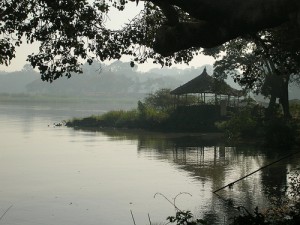 Fast forward a few more hours and we arrived in the last town before Bahir Dar. The driver was apparently supposed to pick up his manager and bring him here but he never showed up so we were hanging out for about twenty minutes. I was a bit uncomfortable at first because this was the type of area where the people just stared. Then one of them came up to me. He was probably in his early 20’s or late teens. He asked me where I came from. Of course, as I tell everyone, without shame “the U.S.A.” He introduced himself with a hand shake and a name I can’t remember and told me that he is muslim but doesn’t like what Bin Laden is doing and that he and his friends were on our side. I didn’t know how to respond to it really other than to say thank you. He then ran off with his friends chewing on sugar cane like all of them seem to do.

We finally arrived where I am now and it is so refreshing. I haven’t gotten around to taking many photos, but as soon as I do, and when I can get to a connection that is faster than here, I will show you. Tomorrow I should be visiting some of the island Christian monasteries scattered on Lake Tana. I’m excited to be able to use my mosquito net for the first time, I heard the bugs here are vicious.