The main attraction of Cambodia and the cause for the boom in tourism in Siem Reap are the temples of Angkor just outside of the city. They are centuries old and were uncovered in the early 1900’s. Personally, they are more impressive than any other group of ruins that I have seen in my travels and the best part is, the sites are not overcrowded.

I had met a British couple at the airport on the way into town and we grouped up to keep the price of the driver down. We all got a 3-day pass for $40 each and headed to the temple complex. It is really huge so a driver of some sort is a must, unless you rent a bicycle. 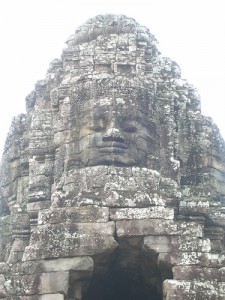 After passing by Angkor Wat which is the main temple we came across Bayon which is famous for massive face carvings cut into large towers. Describing everything in Angkor is pretty difficult to do and is something that actually needs to be seen in order to grasp the full experience. Even pictures don’t capture the full colors.

After Bayon we spent the morning hopping around from temple to temple with lots of interesting carvings and stories being told on the walls. Being in the low season it was quite dead at most of the temples but at Ta Promh the tourists were about. This site is famous for the overgrown trees that intertwine the temple ruins. If you either play the video game Tomb Raider or have seen the movies, some of it was filmed here or themed after this and it is the classic image of the temples of Angkor. This was my favorite temple so far and it is unfortunate that we showed up at the same time as a few tour group buses but it was still interesting and as you can see I was still able to get photos with out people in it. 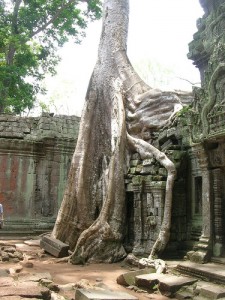 We visited several more temples throughout the afternoon and every one had a unique characteristic for itself. Some were set with huge towers, others were more focused on detailed carvings and some were just basic and not much to look at.

The driver took us around to each area and one of the annoying, but at the same time, unbelievably cute things about temple viewing are the tons of local children that run up to you and try and sell you stuff. These kids are really sharp and pick up on a lot from tourists that come through. They are usually better communicators than their parents. One child will come up and try and sell you a cold drink while the next will have a fist full of postcards for $1. Their sales pitches are usually similar but occasionally vary.

Kids Love to Hang Around the Temples

Repeat a similar conversation over and over and you have your experience walking up to the temples. Thankfully, they have set up ropes on the ground that the children are not allowed to cross so that you aren’t bugged the entire time. The kids like to sing songs to you or even show off their ability to count to ten in twenty different languages. They do what they can to win the hearts of the tourists but the whole thing is just not good. Unfortunately, their parents forcing them into labor and most likely punishing them harshly if they don’t sell. This little girl was just sitting in the window of a pretty abandoned temple. She wasn’t a beggar.

The final temple of the day was Angkor Wat which is the most recognizable, and the main temple of the entire complex. It was also, in my opinion, a pretty big let down. It is impressive just for its massiveness but other than that it was no more to look at than any of the other temples. It is the largest religious complex in the world and I have heard calls to add it to the list of the Wonders of the World. (2010 UPDATE: It looks like it failed in its bid for New World Wonder status)

Once we finished off here and had enough of the temples for the day we headed back into Siem Reap to get some rest. The first day was a lot of fun and I was impressed with what I saw. A lot of times when you travel, you go places that you think will be great but are usually a let down; however, the temples of Angkor stand as one of the best experiences to live up to the anticipation. To think that it took hundreds of years for them to be rediscovered in the jungles of Cambodia and just imagining what it would have felt like to see it for the first time. I joke a lot about feeling like Indiana Jones when I travel but this is the first time I actually could picture him going through the ruins with a torch and fighting off the Khmer Rouge on his way to find a hidden relic. It was definitely worth the trip to Cambodia itself. 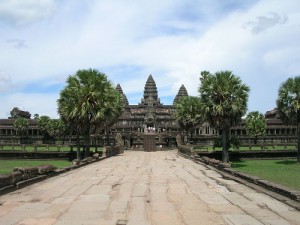