Things have sort of come to a standstill for me. I have a lot I still need to do before I leave but it seems that with the amount of time I have left, I’m doing a healthy dose of procrastinating now. This after getting so much done the first week.

I took a few hours yesterday to go see the new movie, 127 Hours. I figured as an adventure traveler (not so much a mountain climber) I should probably learn a little bit more about the story of Aron Ralston. I remember reading about him in the news in 2003 when the events occurred that the movie is based on. I watched the movie and then did a little reading about him when I got home to separate the story from Hollywood. I found out it was pretty well close to the real story with only a few changes.

The movie itself was OK. It got a bit trippy at times but that would be expected of a Danny Boyle movie. Especially one that delves into the psychological effects of dehydration, desperation and a man trapped in a situation where he faces almost certain death.

The movie and story itself reminded me of why it is important to make sure close family and friends always know where I am going. It doesn’t make sense to venture off unannounced just for the sake of having that feeling of know one else knowing your whereabouts. As enticing as that can be, it is a selfish act. There is definitely a certain rush attached to it in a sense that you know if something happens you’re on your own. I remember when I was younger and just got my driver’s license I would take off and drive north out of Tampa and just stop at random exits as far out of town as I felt necessary and then start making random turns until I got myself a bit lost. I never succeeded in getting completely lost but it would give me a small sense of adventure. 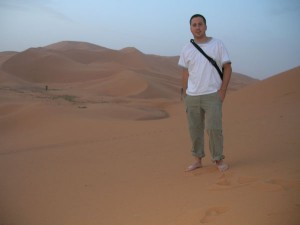 Mom and dad were fully aware I was in the Sahara

I’ve taken that same desire to get lost and experience new places and put it into a more practical hobby. I try not to blog too much about specific travel routes before I leave for a few reasons. One being, plans always change and pre-planned routes can end up being useless. More importantly though, as my dad suggested after I blogged for Morocco, It is not a good idea to publish exact arrival dates and locations of accommodation online before you arrive at a destination. Chances are slim that someone would read my blog and act on it, but why give anyone with motives to kidnap, the blueprint to locating me?

What I usually do is give a tentative itinerary to my parents and brother and maybe a couple of close friends so that they know the route I intend to take. I do my best to warn of days where I may be out of communication due to the remoteness of my location. I don’t think I’ve ever gone more than 3-4 days with out some sort of contact. If I hit a new town I like to, at the very least, check in with an email. With Facebook being as convenient as it is I’ll probably just do status updates with new locations.