Every night outside of the walled city of Harar a ritual takes places that dates back hundreds of years. The Hyena Man feeds the local hyenas that come from the forests outside of the city. Every afternoon the hyenas begin making their 10km walk to the feeding site where locals and tourists gather to watch the Hyena Man feed them with his hand and mouth. The tradition began in order to appease the hyenas during times of droughts so they wouldn’t attack livestock and people. The greatest part about this ritual is that I was able to take part as well! I sat myself next to the Hyena Man and put a stick in my mouth with a chunk of raw meat so the hyenas could come snatch it out of my mouth. It was quite the rush! I fed a few more with my hands. There have never been any incidences with the hyenas and they are very timid when it comes to grabbing the meat. This will definitely be a travel highlight! 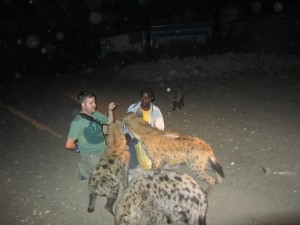