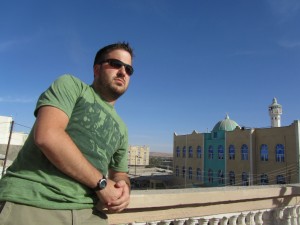 I was aware before arriving in Somaliland that I was going to a place that was not entirely on the backpacker’s map yet. There are no official guidebooks for the region however the Lonely Planet for Ethiopia has a small section for travelers adventurous enough to make the journey. The fact that this country doesn’t formally exist probably has something to do with the lack of other travelers. I arrived at my hotel here in Hargeisa on Monday night and so far only two people have come since. One Swiss just left and the other is a retired American making his way around the world much like myself. According to another traveler I met in Ethiopia the minister of tourism says only about 800-1000 tourists make it through Somaliland per year.

As wonderful as it is to get a sense of distance from the crowds of most tourist destinations, travel through Somaliland outside of the capital city can get pricy for the individual traveler. You are required by the government to be accompanied by an armed soldier and must only travel via 4WD. Local transport is off limits to most travelers; however, some have been able to obtain a pass from the police minister to avoid this compulsory requirement. Somaliland officials take the security of westerners very serious. Two years ago a Danish backpacker was pulled off a local bus and shot by an Islamic terrorist organization from Somalia. Somaliland feels as though it cannot afford any further incidences that may tarnish its peaceful image, so it over-protects the few visitors it gets.

According to the owner of the hotel, five suspected terrorists from the infamous Al-Shabab offshoot of Al-Qaeda were captured in a raid in the town of Burcao east of Hargeisa just last Friday. I imagine with this news it would be next to impossible to obtain clearance from the police to travel alone. Whether or not this extra protection is entirely necessary, it seems as though it is here to stay.

Myself and the other American are giving it one more day to see if any other travelers arrive in order to cut the cost of the escort. The hotel is very comfortable here and we are being taken care of quite nicely. The free Wi-Fi doesn’t hurt either. I’ve taken an opportunity to contact home more often and upload photos and videos. There isn’t much to do in Hargeisa aside from talking to locals so I have taken as many opportunities to stop and converse with Somalilanders as possible. Before leaving the country I will write in great detail about my experiences with the people.

For now I have been researching the next leg of my trip and trying to figure out where I’m going to go. I have no ticket out of Somaliland yet and have spent time with the local airlines to find the best deal. The problem is there are very few flights each week so I’m likely to be in Hargeisa even longer than expected. This is OK because it gives me more chances to really understand the situation here and to be able to explain in more depth. Somalilanders care a lot about what the world thinks of them and it is only fair to give them a chance to show me so I in turn can write about it, and at their request, tell the world.

4 thoughts on “Where are all the tourists?”