If you’re following along this blog and have considered heading to Somaliland, it is likely your exit strategy might consist of the following. Since I didn’t want to backtrack to Ethiopia and deal with getting another visa, my only option was to fly out. There are limited options from both Hargeisa and Berbera. I chose the earliest flight to the United Arab Emirates via the city of Sharjah. Also, I’m not done writing about Somaliland I just figured I don’t want to get too far behind on my everyday happenings.

Flights on the low cost African airlines such as African Express, Jubba and Daallo all fly into Sharjah International Airport which is about 45 minutes outside of Dubai. I arrived in the evening around 5:30pm as the sun was setting. I had no hotel and no arrangements made for transportation. I just figured, inshallah, I’d find my way. I had all the time in the world as my connection out of Dubai International Airport won’t be until 6:30pm the following night.

I asked a few taxi drivers for the price to get to Dubai Intl. and they all said about 85 AED which amounts to $22. I wasn’t going to let Dubai start draining my wallet that quickly so I searched for other options. I asked several bus drivers and each gave me a different story. “Take the 99 bus to the fish market and change to the airport,” the first guy said. “Take the 88 to Rolla Square and then change to the airport”, the second one said. I only got on the 99 bus because it was the next one leaving. I paid 5 dirham and waited for a fish market.

After several stops we arrived at a central bus station and since I never saw a fish market I decided to get off here. I went to another ticket window and asked how I could get to the airport. The guy at the window was really friendly and wanted to know where I was from after a few wrong guesses. First, Arab? Second, Italian? No, I’m American. “Oh, American! Welcome! Welcome!” I thanked him and got on the suggested 5 dirham E301 bus from the main bus station and got off at the last stop, Rashidiya. From here I would need a 12 dirham taxi fare to terminal 1 at Dubai International. When coming out of Rashidiya, be careful of fake taxis attempting to take you. I had a guy offer me a cheaper price but he wanted me to get into his jeep. Taxis in Dubai are clearly marked and offer a meter to avoid getting ripped off. I’m sure the faux cab was legit enough but I wasn’t about to take my chances.

After a total of 24 dirham ($7) I was at the airport. This was three times cheaper than the taxi fare and even though it took awhile, I felt pretty good. 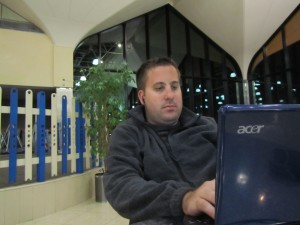 My Home in Terminal 1

Sleeping at the Airport
Every traveler has done this at least once in their lifetime. It is a sort of right of passage. Dubai is an incredibly expensive city to sleep in, especially on a backpacker’s budget. I checked a few hotels nearby but they were all booked. I was willing to spend up to $75 but even that was pushing it. I opted instead to make home in the land-side of Terminal 1. Terminal 2 is the one I’m supposed to be at but there are more facilities at this one. After a few hours of hanging out online in the food court I found a bench in a quiet area and slept for 3 hours.

I won’t pretend to know everything about Dubai based on a few hours outside of the airport checking things out. I went to the metro station and bought myself a ticket to the Burj Khalifa stop so I could check out the tallest building in the world. It turns out an immediate pass to the top of the building would cost me $100. After saving money on sleeping in the airport, I wan’t about to blow it here. I figured it would be a nice view but nothing I couldn’t miss.

Instead, I walked around the Dubai Mall for a few hours. Dubai is truly an international city. There isn’t much Arab about the new city at least. Most of the service industry workers are Filipinos and Indians. I feel like I came across more westerners walking around the city today than anything else. The city reminds me of a cross between New York and Miami. It is appealing to the eye of course but at the same time there is something missing that I can’t quite put my finger on. The mall had all sorts of comforts from home. Coldstone Ice Cream, Macaroni Grill, Chilis, Taco Bell. Do you think I stopped through here with out a “Like it!” scoop of Cookie Doughn’t You Want Some? and a couple soft tacos? Hey, I’m an opportunistic eater. I figure I will have plenty of authentic Middle Eastern food in Lebanon. 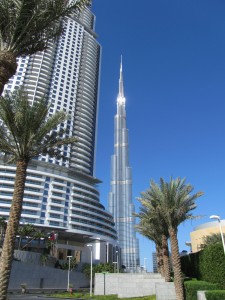 The Tallest Building in the World

Breaking the Law in Dubai
In less than 24 hours I broke the law four times in Dubai and was fined once. When I first got on the bus I sat down in the front seat and didn’t see the sign that said “Women and families only.” Fair enough, the bus driver told me to please move. Strike one. The second bus I got on, I made the exact same mistake. The sign happened to be in a different spot so I figured all was good. I was given a stern warning and told to move to the back. Strike two. When I was getting on the metro to head to the city center I put on my headphones and jammed out to music. I happened to get into the second car to the front of the train but after the first stop noticed less people in the front and wanted to get a better spot. Several women were looking at me. I thought, OK Dubai is cool, the women like to look at me. The train is a little slower to move this time and out from the control station in the front a women comes barging towards me. I take off my headphones and she says, “Please, this car is for women and children only!” You’ve got to be kidding me! I think to myself. I apologized sincerely and told myself, from now on, in the Middle East, I will read every sign before entering a room. Strike three.

At this point, there isn’t more damage I can do in Dubai, is there? My ignorant self couldn’t possible do anything else in such a short time. So I go to the ticket station and I purchase the leg back to the airport. 4 dirham. It was slightly less than my trip there but I thought nothing of it. I arrived at Terminal 1 and pulled my card to swipe my way out of the train station. I was met with a BUZZ. Invalid card, short term transfer exceeded. I was pulled off to the side, told I needed to pay a 6 dirham fine and would have to purchase a new ticket. A police officer came to me and warned me that if I were caught on the train with a ticket that was invalid that I could received a fine of up to $50. I once again apologized for my ignorance and continued on.

Onward to Beirut
Now I’m back in the airport where I seem to be OK. I haven’t made any mistakes here yet and can only hope to keep it that way. My flight to Beirut, Lebanon leaves in 5 hours. I’ll head over to Terminal 2 shortly. None of the hostels I’ve sent reservation requests to have replied with confirmation. I sure could use a shower. If I can’t get anything confirmed I may end up splurging my first night to get all my laundry done and a nice hot shower to start my Middle East journey.