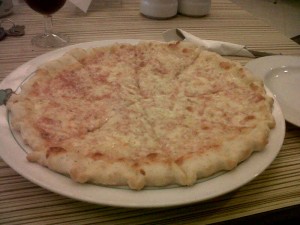 I almost considered not making a post about this because the last thing North Sumatra needs is for people to think it’s a dangerous place to visit. A few nights ago in Medan an American tourist was killed while in a becak (pedicab) on his way to his hotel from Polonia Airport. I’ve left Polonia many times by becak with my backpack and valuables in a smaller handbag, so it could have happened at anytime to me. I have always been warned to be careful of bag snatchers. This is common in just about any city in the world you visit so I always figured if it is going to happen there isn’t much I can do to prevent it other than keeping my bags close.

In this situation it looks like the American guy tried to fight back and in doing so caused his attackers to panic and stab him. I don’t think it’s common for robbers to set out with murder on their minds but when the bag snatch turns out not to be as easy as they expected then they become unpredictable. The very fact that they didn’t even run off with his bags after they stabbed him proves that they were not in the right mind during the incident.

My opinion of Medan being a safe city hasn’t changed. Again, this could have happened in any city. It is a lesson however, that when confronted by attackers it’s best to just give up your valuables and live to breathe another day.

American Stabbed to Death in Medan
An American citizen, Samuel Hyein, 28, was stabbed late Wednesday en route to a hotel, having just left Polonia International Airport in Medan, North Sumatra.
He bled to death while being treated at Medan’s Elisabeth Hospital, due to the injury in his right leg.
North Sumatra Police spokesman Sr. Comr. Heru Prakoso said Hyein was stabbed by two strangers riding on a motorcycle, while he was in a pedicab on his way to the hotel.
“The victim had just arrived [in Medan] at 10.30 p.m. from Malaysia on an Air Asia flight,” Heru told The Jakarta Post on Thursday.
He added, “We are still trying to identify the perpetrators as well as the motives behind the stabbing, as none of his belongings were missing when the stabbing took place.”
He said three teams of detectives have been deployed to investigate the murder case.
An official from the American consulate general in North Sumatra, Kathryn Crockart, arrived to identify the victim but refused to give any comment.
“We are still awaiting the results from the police investigation, therefore we cannot make any comments yet,” the consulate general’s public affairs official, Meta Saragih, said.
Meta added that currently, they are trying to reach the victim’s family in the US.

How all of political issues and the U.S. response directly effects my travel is more about frustration than anything else. My plan when I arrived was to stay a couple of nights in Beirut and then cross the border of Syria on the Beirut-Damascus Road. The first day I was here the road was closed due to riots and then yesterday there were more demonstrations following a speech by the leader of Hezbollah. Overall though, the situation remains peaceful as both sides have seemingly transitioned democratically.

The U.S. has had some strong statements against what has gone on here in Lebanon, even though everything was done within the constitution and through the democratic process. It is frustrating the Lebanese to hear the U.S. is reconsidering it’s economic ties. It is interesting to see the situation from this side as I get a unique perspective.

I went to the Syrian embassy to try to get a visa to travel overland to Damascus but was told there is a 1 month waiting period for American citizens. My second option is to attempt the land crossing with out the pre-arranged visa in hand. In normal circumstances the odds of an American getting through at the land border are about 50/50. The current elected Prime Minister is backed by Syrians so the U.S. response has not been taken well throughout the region. This means, the likelihood of me getting through is very low. There is nothing dangerous about trying though. At worst I lose a half a day. The Beirut-Damascus road is about 3 hours. I will likely be turned around at the border and told to go back to Beirut. If this happens I’ll visit a few more sights in Lebanon and then move on to Jordan by plane.

Keep reading to see if my cunning plan works!