I am sitting in my favorite cafe with WiFi in the Gemmayze district of Beirut called Spin Out. The Middle East didn’t work out the way I had hoped but I am flexible with my plans so I will survive. The denial of a visa on arrival at the Syrian border was always a possibility and my back up plan was Jordan, Egypt and possibly Sudan. Even with the problems in Cairo right now, I was still considering flying to Jordan and going overland to Egypt in hopes that the crisis would be over. It looks like things are getting worse in Egypt and the entire Middle East is tense right now.

Come to Lebanon
Lebanon has been fantastic. My plan was to spend two nights in Beirut and then move on to Syria. That plan changed when I met some really cool people at the hostel and decided to hang out longer. I’ve made very good friends and shared some pretty unique experiences. I watched the World Championship final of handball at an Irish Pub with my Danish friend, Mette, whose passion for the sport reminded me of home for awhile. Me, and now life long Italian amico, Tommy had an amazing night out with a few Lebanese girls who took us to an underground jazz club that was doing a show for Egypt. I raided the temples of Balbeek with Sharni and had enlightening conversations with locals throughout my stay here. I’m a regular at the lounge I write this from and have been treated like family just about everywhere I go.

Forget everything and anything you may have previously understood about the once troubled country and give it a chance. There is so much to do in Beirut and even more to do in the countryside. It is a culinary goldmine and a mixture of European and Middle East. French, Arabic and English are widely spoken and most people are eager to teach Arabic if you ask and sometimes if you don’t ask. Lebanese are incredibly passionate about politics and life. 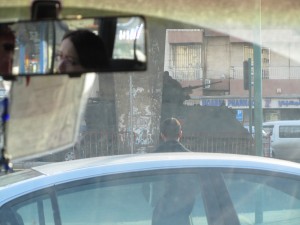 Tanks in the streets of Beirut

I Am American.
When I first arrived it was suggested to me that I shouldn’t tell too many people that I’m American. While I certainly don’t go around flaunting my nationality, screaming red, white and blue through the streets, I never lie about where I come from. The rewards of being truthful far outweigh any potential trouble. I have heard extremely honest and often brutally honest feelings that many Lebanese have towards the United States. I’ve gained a perspective, that without travel, would be nearly impossible to obtain. Having someone look me directly in the eye and tell me that they have a deep hatred for the U.S. government that permeates through them on a daily basis, while simultaneously offering their warm welcome to Lebanon, is an understandable contradiction. These are not just individuals who just say they dislike the U.S. because of some trite cliche. This is real life where neighbors, friends and family have had homes destroyed and lives ruined by policies put in place by the U.S. and Israel. Regardless of what side of the Israeli-Palestinian conflict people support, the people are effected the most, as is with any conflict. The Lebanese I have met say they all want peace but the political actors involved, including Hezbollah, Hamas, Israel and the U.S. all look for continued instability. The tanks in the street and the increased police presence may make a traveler feel uneasy but for Lebanese, it is comforting. Lebanon was in the news when I first arrived because of the “Day of Rage” after President Hariri stepped down due to opposition pressure. The media reported it as if the streets were about to be paved with blood. In talking to a Lebanese girl last night, I was told that the peaceful demonstrations and “Day of Rage” last Tuesday was about showing respect for the President who was stepping down and giving him some sort of dignity.

Going to South East Asia
This has been an educational stay in Lebanon as well as a fun one but I must move on. I’ll wait here at Spin Out for my taxi to the airport a little later this afternoon. I will be en route to Singapore this evening with a connection in Doha, Qatar. I arrive in Singapore Friday afternoon at 3pm and will be spending the weekend with a friend from home. I’m heading to South East Asia sooner than expected. Next week I will get to Kuala Lumpur and try to get a visa for travel to Myanmar (also referred to as Burma). Myanmar is an oppressive and secretive regime and travel there can be difficult not just for Americans but all nationals.

The updating on the blog over the next couple of weeks may not be all that much since I’ve already been through Singapore and Malaysia and don’t expect to write a lot about my experiences there again. I’ll probably catch up on some things I missed a long the way and write about Baalbek, Byblos and Las Geel in Somaliland. I still need to post what I’ve written about the Somaliland people as well.

See you in a bit!

Normally I wouldn’t update this briefly but after posting about going to Damascus and the plan changing, I figured I’d let my readers know that plan was cancelled. I may still try it but I’m going to hang out in Lebanon a little bit longer. Going to go north to Byblos tomorrow and then back in the evening to try the famous nightlife of Beirut.

In the mean time, check out this video of some kids tumbling off of a tire in Berbera, Somaliland.

I had been keeping a close eye on the situation brewing in Lebanon for a few nights while still in Hargeisa. The news about the popular uprising in Tunisia had stolen most of the headlines but I would occasionally catch a glimpse about Lebanon’s political turmoil. I had two choices. Fly to Beirut and attempt my overland Middle East journey or fly to Cairo and be South East Asia-bound much sooner than expected. It looks like it didn’t matter what choice I made because Tunisia has seemingly lit a fire of revolt in the Arab world that is making travel just a little bit more concerning. 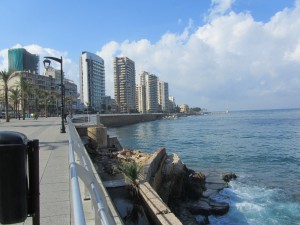 The situation in Lebanon is complicated and unrelated to Tunisia and Egypt, but I’ll share what I’ve gathered so far. Constitutionally, the Lebanese government is power shared. This means that the President must be Christian, the Prime Minister, Sunni Muslim and the Speaker of Parliament must be a Shi’a Muslim. The population of Lebanon is split at about a third between the three religious sects. Hezbollah, who the U.S. and Israel consider a terrorist organization, ceased power a couple of weeks ago and Lebanon has been in a sort of limbo since.

I arrived in Beirut at about 9pm on Monday night. The taxi driver updated me on the current situation and said that things were still tense. He asked me what I was doing in Lebanon and I told him, tourism. He replied, “Now? Huh.” He said to be aware that things can change by the minute and that the road to the airport opens and closes at random intervals. When I got to Beirut, there was no government. I have to say my first night in Beirut was intense. I have been around the world and on some adventures but have never had the adrenaline pumping like when I arrived here. The driver pointed out the Islamic quarters and the Palestinian encampments and said as long as I avoid these areas I should be fine.

I woke up the next morning to the news that the new Hezbollah-backed Prime Minister was elected and the opposition called for a “Day of Rage.” I decided it might be best to hang low and check up on the news online. An Italian NGO worker staying in the dorm with me has been a big help on getting information. His embassy has been in contact with him to update him on road closures, demonstrations and just about any information that might be important. The U.S. embassy also urged citizens in Lebanon to take precautions. The news I was reading online through multiple sources, including: CNN, Al Jazeera (English) and BBC World News, all seemed to show a different story than what was happening. If you paid attention to headlines and saw glimpses of the situation on the world news, you would think that the entire city was in crisis mode. It is true that the situation remains tense but the demonstrations that did happen were peaceful as both Hezbollah and the Western-backed opposition called for peace in the streets. 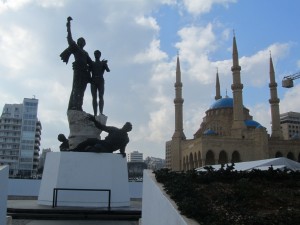 There were hand grenade attacks on the media in some towns outside of Beirut but in the city itself there were merely peaceful demonstrations and tires being burned in the street which seems to be more symbolic than to create problems. There are daily demonstrations scheduled for Martyr’s Square which is only about 100 yards from where I am now but I haven’t heard or seen anything alarming. The army and police presence in Beirut has increased. It is not surprising given the history of Lebanon. It is quite a common sight to see tanks and trucks full of soldiers driving through the city.

I’m in a very safe area of Beirut right now. Even if things start to get ugly (which is starting to look unlikely) I will be well protected. There is a big difference from last night and tonight with the amount of people who are out doing things. I’m staying in a neighborhood called Gemmayze, which has been nicknamed the Greenwich Village of Beirut. It is an upscale area with lots of pubs and fancy restaurants. It’s also the “Christian Orthodox” section of Beirut as the city is divided into many parts.