I am not a foodie when I travel. I have long since given up the idea that I might be. I’d much rather seek out the local variation on pizza than to continue eating something that I just don’t find pleasant to my taste buds. This doesn’t mean that I won’t try things at least once. Today was camel day.

My first order of business was to find the local camel market so I could see the Somaliland tradition of the silent trade of camels and goats. Instead of shouting and bargaining, buyers and sellers tap each other’s hands in order to communicate back and forth about the price. It apparently costs about $600 for a camel and $35 for a goat. Each seller has their animals tied up and labeled. The goats are bundled together as well. I tried to take some photographs but had to be careful of where I aimed my camera. Somalilanders are very conservative and don’t very often approve of their photograph being taken. I asked one woman with a bundle of goats and she quickly pointed her finger in disapproval. Another man welcomed my curiosity and allowed me to take a picture. Also, the camels are apparently not too keen on having their video taken, as you can see in the video below.

Standing in the camel market as a foreign observer means attention is unavoidable. Many people ask me how I’m doing and where I’m from. If I stand in one spot too long the crowd thickens. After a few minutes of camel watching I decide that it is time to head back to the center of town. 10:30am is when the fresh camel meat comes so I moved quickly!

Camel Meat
I returned to the hotel after a 30 minute walk back from the camel market. Abdi, the owner, asked me if I wanted traditional camel meat or a meal put together with spices and prepared with sides. I told him I want it traditional and how the locals do it. He had just the place in mind. Abdi arranged for someone to walk me down to a restaurant called, Boodale. Good thing I had someone with me because it was pretty nondescript when I got there. 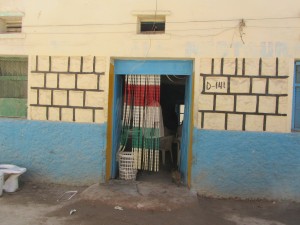 I sat down inside on a wooden bench. I was the first arrival but soon the restaurant would be packed with Somalilanders looking for their morning fresh camel meat. First up on the menu was camel soup and anjero. The camel soup was salty and delicious and I drank most of the bowl that was put in front of me. Anjero is just a variation of the Ethopian injera and I have never really found it to be all that appealing. They brought out some sort of sauce next. More locals starting pouring in and were served rather quickly. I was novelty to many of them. As with most Somalilanders, they wanted to know where I was from and why I was there. I’m American, and I’m a tourist.

Eventually, the boy running the food back and forth from where they cook it brought a dish full of meat to me and began cutting it up. Another helped me identify which parts were what. The white fatty pieces were the camels hump and the darker meat was other various camel parts. The hump was definitely chewy but when mixed together with the darker meat and dipped in the sauce it wasn’t so bad. One of the guys went and grabbed me a cold coca cola and some napkins.

At the end of the meal I walked up to the counter and handed the owner a fresh $5 bill. Quite a lot of food for the money and I only had a half order. From the looks of it, men gather here in groups every morning. I definitely enjoyed the meal. The soup was the best part and the dark camel meat would have been great with some seasoning. I highly recommend anyone in the area to check it out. Ask Abdi, the owner of Hotel Oriental, and he’ll make sure you get there. 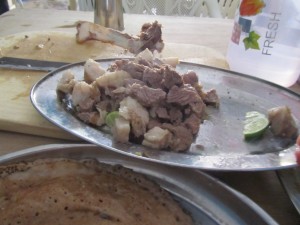