I’m back home in Medan after spending a few nights visiting friends and “family” from the village I spent two month volunteering in. I am 3 days from my 31st birthday and trying to figure out the best way to celebrate it. Aside from my one month TEFL certification and two month teaching in Bukit Lawang, I’ve been on the road since January and unemployed since November of 2010. This means I have exactly one month left of freedom before I’m locked into a contract. I might as well make the best of it. I want one last adventure…

I find that my blog tends to get more readers when I’m doing more interesting things. I picked up quiet a few while traveling in Somaliland and even landed myself an article on ABC News (re: Revolution Chasers Redefine Adventure Travel. South East Asia, compared to Africa offers much fewer challenges. The region has a pretty laid out trail for backpackers to follow with easy to find comforts from home. I hear from word-of-mouth that even secretive Myanmar is not too difficult once you’ve got the documents needed to travel within. So creativity is important if I’m going to seek out a new challenge. However this might just be the perfect time of year. Ramadan. 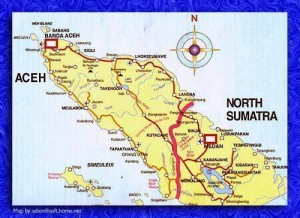 Sumatra, while not exactly a walk in the park, is doable for most travelers if they can get past the initial shock of Medan upon arriving. It’s an island with a history of violence, war and natural disasters. Their is a bit of hassle for the newcomer but a lot of reward for those who veer off from the more popular destinations of South East Asia. Even during Ramadan, Medan, Indonesia’s 4th largest city is still very manageable.

The challenge lies in the northern province of Aceh where strict Islamic law (Sharia) is practiced. Aceh also received worldwide attention from the 2004 Indian Ocean Tsunami where 62,000 Indonesians died in the most heavily effected area of the disaster. Occasional travel warnings pop up for the semi-autonomous and fundamental Islamic state due to violence but there have been more than enough positive news ranging from the beautiful restoration projects after the tsunami to the friendliness and hospitality of the Acehnese people. The fasting month of Ramadan is typically a turn off for most travelers but I’m looking to experience something a bit more challenging and different so it seems like the perfect time to go.

During Ramadan, Muslims fast from sunrise to sunset. This means no eating or drinking anything, even water. There is an early morning wake up call from the mosques to let Muslims know fasting will begin shortly and they must eat before the prayer. In Medan, this is hardly a set back for non-Muslims as there are plenty of opportunities to find food. Although, walking around the streets, smoking cigarettes and consuming liquids is considered quite rude.

In Aceh however, Islamic law requires Muslims to take part in fasting and even earlier this week there were three people arrested for failing to fast. A bill recently passed that extends Sharia law to tourists as well. If I decide to go this week I’ll make sure to get clarification on any law that I might encounter. Punishment under Sharia law ranges anywhere from getting a number of lashes in a public venue to stoning to death. While this may sound scary, and believe me I’m taking it serious, problems are easily avoided if proper preparations are made. Most visitors to Banda Aceh, the regions capital, pass through en route to the ferry to Pulau Wei, an island just off the coast of the northern tip. However, I plan to stay in Banda Aceh for a few days and really get to know the people.

I must wear long pants or at least shorts that cover my knees. No tank tops or singlets. Drinking alcohol is prohibited and even though there are some Chinese restaurants and NGO hot spots where alcohol can be consumed in privacy, I would rather not even test it. Adultery, as defined in the Biblical sense, would mean any relations outside of marriage are strictly prohibited. So, no, I won’t be holding hands or having a romantic walk through Banda Aceh with any women I might meet.

My biggest challenge will come from having to respect the Ramadan fasting period. I plan to do as the locals while I’m there. During the day I’ll lay low, read a book, listen to music and relax as to not require too much water. Fasting, or “puasa” in Bahasa Indonesian, is one of the 5 pillars of Islam and those who truly believe here have told me over and over again that it is not difficult for them because they want to do it. I can imagine that since I’m a non-believer, the fasting will be quite challenging. I look forward to it as I think it will offer a unique insight into the culture.