Before I go any further. For reading purposes. Aceh is pronounced: “AH-chay”

I wanted to see more of Banda Aceh so on my final morning in Aceh I rented a motorcycle and after eating a quick breakfast I made the 17k trip into the city center. I was armed with only a simple tourist map written in only Indonesian. My first stop was the tsunami museum. Many of the exhibits were closed but I got to see a little bit about the post tsunami damage and efforts of restoration. Unfortunately, most of the exhibits were in Indonesian only and only a few had English. The museum opened in 2007 and admission is free. 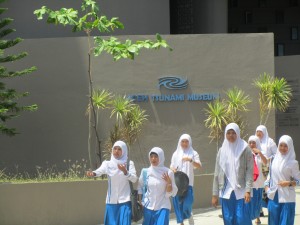 After the museum a few local school girls helped me find an internet cafe. They hopped on their bikes in pairs and I followed them down the street. I took care of some website business then crossed the street to a travel agent to book a flight back to Medan for the following day.

My next order of business was to find a power generator vessel that came ashore during the tsunami. Unfortunately, I was unsuccessful as it was tucked away in a residential area. I then headed off in search of the grand mosque.

Since the map was labelled in Indonesian I wasn’t sure what much of it said so on my way to the mosque I accidentally came across the Aceh Thanks the World memorial park. After the December 26, 2004 Indian Ocean (Boxing Day) earthquake and tsunami disaster, Banda Aceh was completely devastated. The maps that showed how far inland the waves damaged was incredible. Indonesia alone suffered anywhere between 170,000-220,000 of the 200,000-300,000 total deaths from this disaster. The province of Aceh alone had a death toll of nearly 100,000. There was a huge response to this tragedy around the world and in order to show its gratitude Aceh built a memorial park with a large wave monument and individual plaques to each country who gave support. 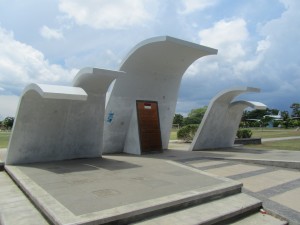 Aceh Thanks the World

I spent some time in the park reflecting back on December 27th, the morning after the disaster. I vividly remember sitting by the computer reading articles and following message boards. I had never donated to a disaster prior to the tsunami but I felt compelled to and have done my best to give at least something when a major disaster happens. I remember not even knowing about Banda Aceh prior to the tsunami and here I was 6.5 years later standing in the city center that didn’t exist when I first learned about the place. 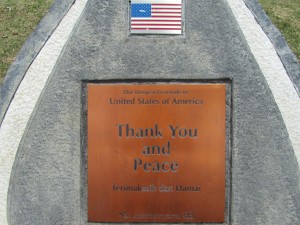 Aceh thanks the United States of America

After taking a walk through the park and reading all the plaques dedicated to each country, I hopped back on my bike and headed for the mosque. The grand mosques in Sumatra have a Dutch colonial look to them. They are massive and a gathering place for Muslim men and women at almost all hours of the night and day. An afternoon call to prayer was being announced as I parked my bike and walked into the yard. I get looks when I’m in the city but I seemed to get extra attention inside the mosque compound. I wasn’t dressed appropriately to enter so I just hovered around outside and took photos. 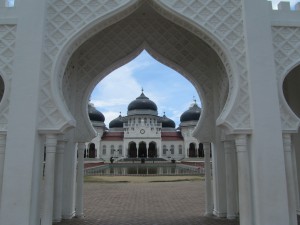 I was hungry and since Sharia law in the Aceh province makes it illegal for Muslim and non-Muslims to consume food and drink during fasting hours, I had to be discrete about it. I headed back to the beach and had a quick lunch at the bungalows then returned to Banda Aceh. It was a nice ride so I didn’t mind doing it. 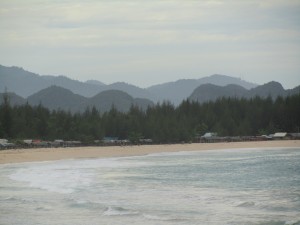 I wanted to try and locate the power generator vessel that was carried through Banda Aceh into its final resting point where it is today. My second attempt was more fruitful and right in the middle of a residential community was this enormous power generator. The museum and the memorial were interesting but the devastation really hit home when I saw this giant ship that was quite a few kilometers inland from the Indian Ocean laying in between a bunch of houses. Then sadness sets in when I realized this vessel rested on top of several homes killing the families that lived there. They’ve put the vessel to good use and it gives power to Banda Aceh. 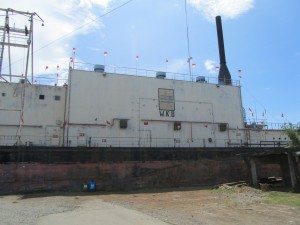 The final stop I wanted to make was “kapal atas rumah.” Translated this means, “ship on a house.” It was in a small neighborhood along the riverside. There were several boats that rested on top of homes after the tsunami but this one was left in its place as a memorial. Again, like the power generator vessel, this was in a residential area. I wasn’t sure where to look for it so I asked some locals and they told me the way to go. 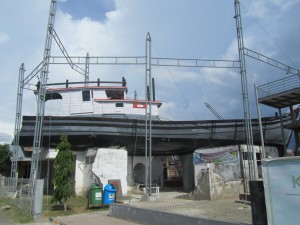 Boat on a roof.

How the Tsunami Ended Decades of War
I didn’t quite spend the amount of time in Aceh that I originally planned. I wanted to take a slow journey back to Medan by bus stopping along the way in various towns and cities. There is virtually no information about the province in guide books outside of Banda Aceh and Pulau Weh so it would have been an interesting adventure where I could have put my Indonesian to good use.

Aceh has never really been a tourist destination due to the ongoing armed conflicts that the region has suffered for decades after Indonesia became independent. There have been attempts by armed separatist groups to declare Aceh an independent nation as it was prior to Dutch colonialism. There were demonstrations in the late 90’s and conflict leading all the way up to 2004 before the tsunami.

I don’t want to talk too much about the politics and take any sort of a stance on it since I’m living in Indonesia now and free speech does not mean the same thing as it does back home but one could probably be forgiven for sympathizing with the separatist movement. Read more about it or watch the documentary The Black Road if you’re interested.

If just one good thing came out of the tsunami it is the almost immediate impact it had on the war. By December 28th, just 2 days after the tsunami, the GAM separatist movement in Aceh declared a cease fire and less than a year later the Indonesian government and GAM came to a peace agreement that ended decades of civil war. The tsunami itself was stated as the main motivating force for an agreement as the separatists felt the Acehenese people had suffered enough and deserved peace. 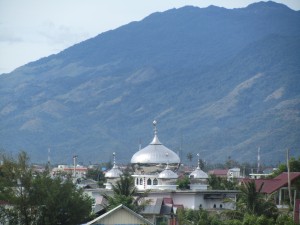 Banda Aceh is a pleasant city. Unlike many other Indonesian cities.

The peace agreement still stands to this day and the city of Banda Aceh has at least recovered from the physical scars of the tsunami. The situation in Aceh still remains volatile as the war with Indonesia was not that long ago. Hopefully, things stay as they are now and peace continues because the Aceh is a beautiful place. I do look forward to making that journey through the province at a later time.