I rented a moped on Saturday afternoon so I could meet the girls at the market in Tomok just a few kilometers away from Tuk Tuk. Chichey and Laura work at Samosir Cottage where I’m staying and have been really good hosts keeping me company in the evenings and helping me practice my bahasa Indonesian. After meeting for a short while I decided to head back. I ended up with a flat tire but luckily I was only a short distance from a repair shop. If you’re keeping count, this is moped 3 – Joey 0. It only cost me about $5 to fix it and I was on my way back.

When I arrived Cichey informed me that someone had just died outside of our hotel. The island of Samosir is predominantly Catholic and the community was building a church together. I was told that different families take turns working on the church because funding for it is non-existent. It’s activities like this that keep the community close together where everyone is family and everyone helps one another. Unfortunately, in a tragic event, a portion of the stone from the church fell on top of a 52 yr old man and killed him. He was brought to the clinic but there was nothing they could do. The entire vibe of Tuk Tuk had changed. I had stayed a couple of extra nights in hopes to see traditional Batak dancing and singing at the hotel but Chichey informed me that because of the death that there wouldn’t be any dancing. I could hear the wails of the mourning family members coming from their home right across the street. Tuk Tuk isn’t really much of a party town but I had been told Saturdays are usually active. This Saturday was an exception as bar owners kept their music very low and very few people went out. 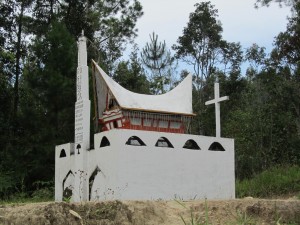 Everyone in Tuk Tuk knew the man and I passed by his home every morning. I recall his wife motioning for me to come take a look inside a few times. In Tuk Tuk most homes are also stores where the lobby is filled with art, groceries, or souvenirs. There was a large crowd gathered inside the home all day on Saturday. Everything had been cleared out of the shop and mats were placed around. The body was laid out on the floor surrounded by candles and family members praying, mourning and sitting quietly comforting eachother. The body would stay there for two days. The children of the man were in Medan so they waited for today, Sunday, to have a funeral service. When I woke up this morning I could hear the hymns and prayers familiar to me from my Catholic upbringing. It is a mixture of Batak and Catholic tradition. Normally, when someone dies of old age, the mourning would be followed by celebration and Batak dancing. In cases of an untimely, accidental death, the dancing and singing are not a part of the ceremony.

I would never wish to encounter a situation like this but it did give me a really unique insight into the way of life and tradition of a people I had not previously known anything about. This is experience that you can’t pick up from an anthropology textbook. An interesting note is that Catholics make up only 1.8% of the entire population of Indonesia.