The lack of updating is due to the lack of real adventurous things to write about. However, I had a really great weekend hanging out with my good friend Shawn from Singapore. I was able to stay at his house and save on accommodation. Shawn and I go back just over a decade and were both DJ’s in central Florida. I gave up the turntables but Shawn stuck with it and has made a pretty solid name for himself with residencies in Singapore and gigs throughout South East Asia. Friday and Saturday we went to Butter Factory in Marina Bay. The club was really cool and was quite big. Shawn had the crowds going crazy after midnight. I really enjoyed it and thankfully his girlfriend was around to keep me company while Shawn DJ’d because it was a long night on Friday till 4am. 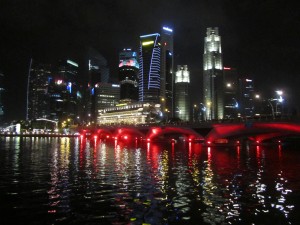 One of my main goals coming back to Singapore was to make sure I got to see the skyline this time. I missed it my previous trip to the country and wanted to make sure it happened this time around. Luckily the club was near the central business district so it wasn’t too difficult.

This is now my second Chinese New Year that I’ve spent in Singapore. Coincidentally, it was the exact weekend three years ago that I flew into Singapore and spent Super Bowl/Chinese New Year hanging out with Shawn. Last time, we missed the Super Bowl because we tried to stay up all night instead of just sleeping and waking up really early. Lesson learned and this time we got to see the game from home. The broadcast was different than in the U.S. It was All Sports Network which covers the game for Singapore, Hong Kong, Indonesia and other South East Asian areas. Obviously, the game was great and the right team won! The sad part was, I’m pretty sure Joe Theismann was doing the commentary which was absolutely brutal.

Singapore seems like a place that could really grow on me and I certainly will at least keep it in mind when looking for work. Shawn’s girlfriend teaches there and said they treat educators really well. It would take me awhile to get enough experience to teach in a city like Singapore but I’ll keep it in the back of my mind going forward.

I took off this morning for Kuala Lumpur, Malaysia, where I currently reside. More coming soon of course. I just wanted to update about the weekend.