A mandi is a traditional Indonesian way of washing oneself where you take a small scoop dipped into a large tub or container of cold water and pour the water over yourself. It’s accompanied by an eastern style squat toilet in which the mandi is also used as a means of washing after going to the toilet. 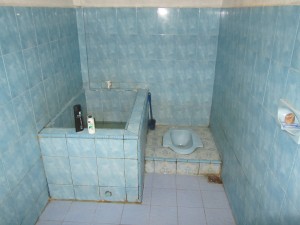 And I need you today, Oh Mandi.

In Indonesia, especially in rural areas, these baths are commonly found. Western oriented hotels are an exception as well as some apartments and homes in bigger cities. What I typically do is leave a small amount of water in there for the occasional hand wash or refresh during the hot afternoon hours. There is no hot water but that doesn’t matter too much as the cool water is more refreshing. Sometimes the water comes out warm anyway which doesn’t do the trick like the cooler water. When I’m ready to take a full shower, which is typically in the morning and evening before bed, I will fill it up to about 1/4. 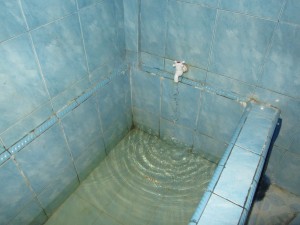 After the desired amount of water is in the mandi, it’s time to start scooping water out and onto yourself. A few direct hits to the face and back are usually enough to wake me up. I typically stand away from the mandi when I’m using the soap as to not let dirty water go back in. When I’m finished scrubbing I clean off my hands first and then rinse the rest off by pouring the small scoop over myself until I’m good to go. 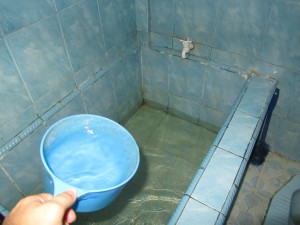 When I first encountered the mandi I was a bit concerned but after a few uses it really is no less refreshing than an actual shower. I have no choice really, seeing as though I’m living in a small village.

One thought on “How to use a mandi (Indonesian bath)”