Since I’m about to settle down in Indonesia I figured it was time to confront a question I always have trouble answering. Whether it’s to a curious local or while editing my Facebook profile, I can never quite figure out what to say and often change my answer depending on my mood.

Where am I from? Well, I was born in Westbury, New York. An average sized town in Nassau County on Long Island. In 1991 my family and I moved to Tampa, Florida. This is a moment that will forever define who I am as a person. The struggles I went through adapting to the move effected my family and social life as well as my education. To say it was a difficult move for me would be a gross understatement. I don’t feel like all the effects of the move, which was in the middle of my final year of elementary school, went away until well after I had graduated high school. I never felt comfortable with who I was during my middle, junior and high school years.

It wasn’t until, ironically, my darkest years that I really started to see light at the end of the tunnel. Now, of course I can’t blame every set back I’ve ever had on a traumatic mid-school year move. That wouldn’t be fair to my parents whom I’m sure if they had it to do over again might have made a better effort to make sure I didn’t get pulled out of my comfort zone and thrust into the “new kid” role. 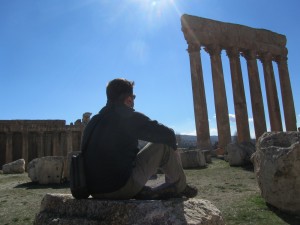 I speak of this transition in depth because I feel that I’m going through a similar period of my life right now where this is relevant. I guess I’d also like to take the next few lines to express my complete forgiveness to my mom and dad for the move. It wasn’t easy and at times I outright hated them for it but now I feel like saying thank you, because while I can’t possibly predict where I would be had we not moved, I can look at where I am today and be thankful for the strength I gained from being thrust into a new culture at such a young age. And, if you don’t think there was a large culture gap between Nassau County schools in the late 80’s & early 90’s and Tampa, Florida then look no further than the demographics of the area of Westbury I lived and the integration of schools in Hillsborough County.

How I didn’t come out of this with extreme prejudice can only be credited to a strong interest in culture and geography that was instilled in me at a young age. My favorite parts of junior high were always culture days where I got to share my Italian heritage or excel in naming world capitals in class. Even though “cracker day,” where people of other race groups would gang up on whites and punch, kick or rob them on their way to the buses after school could have given me ample excuse for bigotry, it didn’t.

I think it had the opposite effect and made me crave knowledge of other people and to learn first hand through experience how people of different races and cultures truly are rather than looking at a small sample size. If I’m bigoted in any way it’s against people who succom to mob mentality or act belligerent towards others just because someone else says it’s what they should do. Or worse, a two thousand year old book that carries similar instructions. Good thing that doesn’t happen in the grown up world, right? I’ve always wanted to say this next phrase; but I digress.

I felt it was necessary to give a strong background of where I was born and the event that moved me to where I spent the greater portion of my life thus far, Tampa, Florida. After getting past the fact that I’m either assumed to be American or they’ve asked and I’ve answered, the instinctive reply to the question, “Where are you from?” is almost always, “Florida.” And depending on how off the beaten path I may be, I’ll either go further in saying, “about an hour from Disney World.” or “about 5 hours from Miami.” People all over the world know Mickey Mouse and Miami Vice, they haven’t quite heard of the Cuban sandwich or Gasparilla yet.

The problem is, that to most of the world (and Facebook apparently) you come from where you are born. Your birthplace is a representation of who you are. This just doesn’t feel right for me as I no longer feel “New York” represents who I am. This goes a step further where many cultures define where you are from by where your parents were born. That would make me a mix between a New Yorker and Pennsylvanian. I’ll admit it would be cool to raise some eyebrows here in Indonesia by telling them I’m from “Bethlehem.” (Pennsylvania, not the Palestinian city) None of this even considers the idea that you’re from where your blood is and in that case, as with most Americans, I’m a mix of European flavors. I have been pegged as Italian by people from Italy that I meet in other countries.

All joking aside. I’m American, I was born in Westbury, Long Island New York. I lived most of my life in Tampa Florida and raised by parents who are a mix of German, Hungarian and Italian heritage from New York and Pennsylvania and now I currently will be residing in Indonesia for the foreseeable future.

So, where am I from? I don’t know. I just can’t wait until we develop warp drive and I can answer that with a simple, “Planet Earth.”

3 thoughts on “Where am I from? (One man’s struggle with updating his Facebook profile)”