Well, I can officially add “buying a one-way flight to Ethiopia,” to the list of things that younger Joey would never have thought that adult Joey would do in his life. Hell, I even remember at 23, sitting in front of my computer reading about backpacking in Europe and getting myself worked up over the overwhelming nature of the whole idea.

So here is the plan. I work till November 24th. I’m going to spend the holidays here in Tampa with my family, tying up any loose ends before heading across the Atlantic on January 10th. I’ll spend a few days in Addis Ababa securing a visa for travel into Somalia. I wrote a few papers on Somalia at USF and gained an intriguing perspective on the country as a whole. I found that there are two Somalia’s.

To the south there is the war-torn, failed state fought over by the Islamic Courts, the western-backed transitional government and clan-loyal warlords. This is the chaotic Somalia that you hear about in the news when the media decides they want to report on a recent pirate attack in the Indian Ocean or the Gulf of Aden. 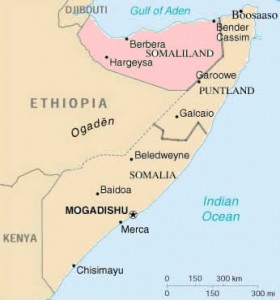 Thank You http://magicstatistics.com/ for the map of Somalia

Then, to the north, you have the self-proclaimed independent state of Somaliland, the former British Somalia. Somaliland, while in the territorial boundaries of Somalia proper, is a destination that begs to be explored as it is self-contained and has a fully functioning government separate from that of its southern counterpart. Everything I’ve read about Somaliland intrigues me. It is a democracy that is flourishing without the support of the western world. Because Somaliland goes unrecognized by the international community, very little aid (if any at all) reaches the people. They have found a way to function on their own with a blend of elder Islamic tradition and western style democracy. I have a unique opportunity to visit a country that is not yet a country and to experience a nation in its infancy. It’s going to be tough because there is very little tourist infrastructure but I can’t pass up this opportunity.

After spending a few weeks in Somaliland, and scratching “Put my feet in the Gulf of Aden,” off my list of things to do before I die, I’ll head south from Ethiopia into Kenya overland and fly from Nairobi to Bangkok in time to settle in before taking my TEFL certification course in Ban Phe.

3 thoughts on “It’s official, Back to the Horn of Africa”