After a 10 hour bus ride Mike and I arrived in the eastern Ethiopian town of Harar. The bus ride was comfortable compared to the last time I was here. Ethiopia is undergoing quite the transformation with high-rise buildings going up in the capital and fast non-stop bus routes in between major towns. This is a far cry from the cramped local buses that tourists used to take in order to get from place to place. I can say I’m happy that I got to experience the more grueling ride and as happy to no longer have to do it again. 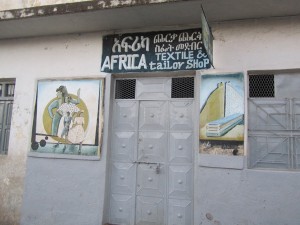 When arriving, you quickly descend into the valley. You’re greeted by tour guides, beggars and a general audience of locals interested to see the arrival of the ferenjo (an endearing term they use for the white people who show up in their city.) Mike and I were the only two frenjo arriving this evening so we probably garnered a bit more attention.

Our first order of business, after finding our quaint family-run guest house in the old city, was to find food. Harar is divided into two major parts, the old walled city and the new city. We figured there should be no problem finding a simple restaurant where we could get a good meal after not eating a lot on the bus. Block after block and turn after turn in the old city, we came up empty. There were several cafes and bakeries but nothing offering substantial food. We finally decided it might be a good idea to just sit and have a beer and gather ourselves. The only food available was slabs of raw meat on a plate of injera. We weren’t in the mood for raw meat so we carried on and eventually found food a little more fitting for our style. 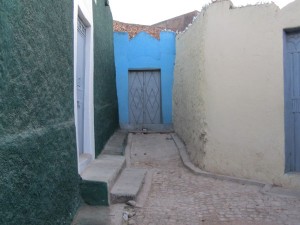 Harar is unlike any place I’ve been before. It is a spiritual and colorful town. UNESCO was so impressed with its walled city that it gave it world heritage status and deemed it the fourth holiest city of Islam. Every morning the waling of prayer can be heard from throughout the city. Enjoying Harar is to enjoy the people who live there. Harari people have called this valley their home for over 1,000 years. While there is still a fair amount of hassle in Harar, there are still plenty of genuine people who just want to say hello or lend a hand. Harari of all ages will go out of their way to make you feel welcome. “Ferenjo! Hello! How are you?! Welcome Harar!” The lack of a lot of tourists really reinforces the vibe of Harar and convinces you that you have traveled a long way to get there.

I spent two nights in Harar. During the day I wandered around the old city in search of the six gates and a few mosques that date back to as early as the 10th century. The other main attraction in Harar is the hyena feeding that goes on outside of the walled city every night at sundown. More information on that coming up next!