Food Fridays
When I ask Indonesians what different areas of their country are famous for they usually say Jakarta is fashion and Bali is for tourists. But Medan, while not the most aestetically pleasing city in Indonesia, is almost always synonymous with food. Whether it’s someone from Java or Kalimantan most Indonesians agree that Medan is a culinary paradise. It’s got its own styles and takes on other Indonesian dishes and along with Padang it makes Sumatra a great place to try real traditional Indonesian food. That’s why I’ve started to share some of the food I am eating in what I’ll call Food Fridays! A couple of weeks ago it was Sate Padang.

Dendeng
I went to a spot that my roommate suggested a few weeks back. Normally, I would get a famous Indonesian dish called rendeng but tonight it was “habis” or finished! He gave me dendeng instead. Dendeng is thin sliced pieces of dried meat. It isn’t that different from what most of us know as jerky. It’s tough and chewy but pretty delicious. In the style found here it’s usually covered in a red chili sauce and served with rice and vegetables. This is another specialty from Padang, West Sumatra. It’s not nearly my favorite thing to eat in Medan but it’s nice every now and then. 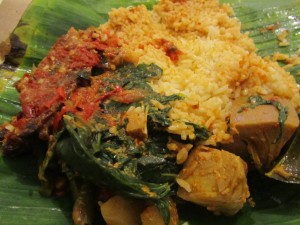